How Good Are You At Losing? 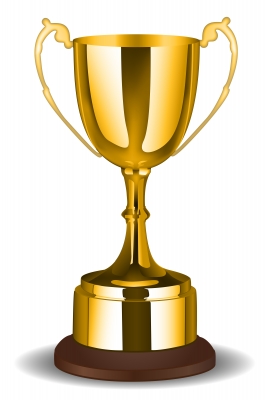 “Everyone loves a winner.”  That’s an old phrase, but true.  How many runners-up are remembered?    Regardless of the nature of the competition, holding the trophy that says #1 or the feel of the winning ribbon with its gold medal being hung around the neck is an unforgettable moment.  There is great satisfaction and reward in working hard, putting forth your best effort, and coming out on top.

There used to be one winner for every competition.  At least one #1, and maybe a #2 and #3.  The rest were, well…losers.  They tried their best, but failed to take the top prize.  Sad, maybe, but not defeated.  It wasn’t the end of the world.   Worthy competitors, some people would try again.  Others would train more, improve their technique, learn more and come back year after year until they were victorious, learning valuable lessons along the way.  The rest turned their efforts to some other interest.

Somewhere in the past years, someone felt that losing wasn’t so good and decided that winning was more important than honest competition.  Everyone gets a prize.  The New York Times article reported that one Maryland summer program gives each child an award every day, and the day is only one hour long.  Soccer teams end their season with awards programs, where each child gets a plastic trophy.  Children in schools get an award for behaving for the whole day.  Parents have jumped on the bandwagon, offering a treat or a prize to their children for taking out the garbage or doing their homework.

Rewards are a powerful motivator, but lose their luster after a while.  If everyone gets one in the end, why put forth the effort?  Employee incentive programs can work for a while, but foster a culture where employees expect an extra bonus or reward just for doing their job.  Isn’t that what a paycheck is for?

As the article points out, a guaranteed award can backfire.  Sooner or later, children grow up and have to face real competition, like getting a job.  Not everyone who interviews get the job, no matter how many plastic trophies they have on their bedroom shelf declaring, “You’re #1.”  The experience of real defeat can be devastating if you’ve always walked away with a prize.  You don’t always win the affection of the one you happen to love.  Everyone doesn’t get the raise or promotion.

Losers can be the real winners in the competition of life.  Parents put their children in lots of activities hoping for the next Wimbledon tennis star or NFL quarterback.  Losing may be the child’s only way out of fulfilling a parent’s unrealistic expectation.  Losing is a check on reality.  Losing a job is an opportunity to examine if it was the job fit, the wrong company, not measuring up to expectations, or personality traits that make a person difficult to work with (or for.)

There has been a lot written about the tough job market and how hard it is to get a job.  If you’re reading this on Nexxt, you’re probably one of the thousands of job-seekers that are still looking.  This is real competition.  There are no losers, only competitors.  With each rejection or “no thank you” letter comes the opportunity to learn what needs to be improved or changed in order to be a better competitor.  The only losers are the ones that give up and take themselves out of the game.