How To Overcome Fear 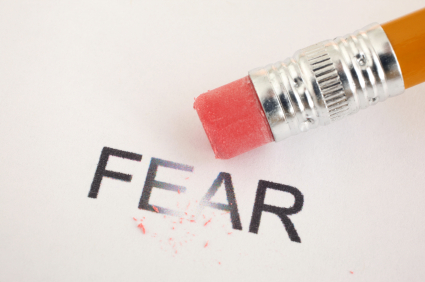 One of the things that holds many of us back, in our careers and our lives, is fear. For one, fear is so hard to define. Sometimes it's just a quiet voice that tells us that we aren't capable of succeeding, that if we try, we'll only waste our time and be humiliated. Other times, the fear is that you'll succeed, but it will only cause more stress, more problems and in the end, won't be worth the effort.

The problem with fear is that without realizing it, we let it stop us from doing the things we want. It doesn't just take courage to overcome it, it takes willpower to keep on working through the fear.

If you want to overcome fear and reach your goals, here are 5  you should know:

Sometimes you have to do it scared - Just because you're scared doesn't mean that you shouldn't do something. Accept the fear and do it anyway. It's only by taking risks that we learn to cope with fear as just a natural part of life. If you're rarely ever afraid, it means that you aren't pushing yourself out of your comfort zone. Fear is simply just a normal reaction to growing. So, as Nike so eloquently put it, "Just do it!".

Set goals with timetables - Too often, we have these goals in our minds that we plan to complete "one day". It's the bucket list and there seems to be a fear that if we go ahead and do them, the we have nothing left to do. What ends up happening is that the "one day" never comes, and what we're left with is too little, too late. Instead, make a list of goals and set reasonable time frames for doing them. Don't let the fear keep you from doing everything you set out to do. We're only on this planet for a very short time, do it all now, and trust that there will still be mountains left to climb when you're done.

Live with no regrets - Not taking chances is one of the things that people often regret the most. The old adage that you regret the things you didn't do the most is so true. When you let fear be in control, you'll spend a lot of time later wishing that you had been brave enough to take the chance, even if it didn't work out. Just remember that even mistakes can be important in our lives. Every experience shapes and changes us, so just because it didn't work out the way you planned doesn't mean that it wasn't a valuable experience.

We make it harder than it needs to be - I, for one, am famous for making excuses and looking for reasons to not do something. I'm sure it's happened to you at some point, where the voice in your head whispers that it's too hard, or that you're too tired or whatever. This is just fear trying to work its way into your mind. Don't let it win. Look at the real obstacles and develop a strategy to overcome them. Don't let the tape in your mind tell you that it's so much harder than it really is.

You don't have to be courageous or even brave to overcome fear. You simply have to understand how fear works and accept that those voices that try so hard to scare you aren't on your side. They don't exist to keep you safe, their goal is to keep you controlled, to make you feel small and weak. It's almost as if our brains were afraid that one day we would realized how powerful we actually are.

What do you think? Do you let fear make decisions for you?

Everyone You Need To Know In American Horror Story: Cult
news via Refinery29