Is there a BEST College Major for a Military Career? 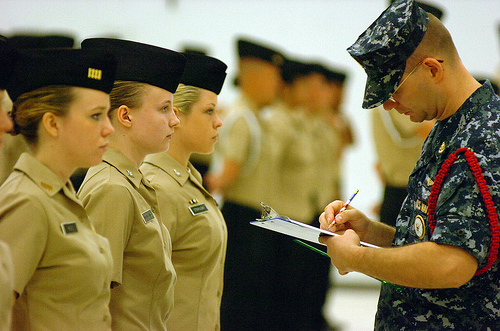 A common question asked by many young men and women seeking a career in the military as officers is, “What should I major in?” I heard this many times when I served my tour of duty.
Some say history, economics, or political science. Others say, if you want to pursue a tech officer's career, you should major in science or engineering. Then again, history teaches you about the many battles and tactics used by armies throughout the world. Economics is good if you plan to be a supply officer. Political science gives you the background you need to understand the events that shape countries. Perhaps most useful, especially for senior officers would be management and business administration, because the higher you move up in rank, the more you'll be dealing with administrative and management duties.
If you can meet the tough admission process, apply to with the U.S. Naval Academy. If you get in, Uncle Sam will pick up the tab for your books, tuition, and room and board. If you don't make the cut, go to the U.S. Naval Academy Preparatory School and re-apply. If you don't want to (or can't) go this route, sign up for Naval ROTC while you’re in college.

You can also sign up for the Green-to-Gold program. This two-year program allows eligible, active duty enlisted soldiers to complete a bachelor’s degree or graduate degree and be commissioned as Army officers when they graduate.

If want to survive as a new commissioned officer, there are some basic rules you need to follow. Yes, you outrank all warrant officers and all enlisted soldiers, including Non-Commissioned Officers (NCOs).  But keep in mind that you'll be working with some highly experienced NCOs who have earned their stripes—some in combat duty. So treat them with respect and give them duties that reflect their rank and time in service.
There's nothing worse than a cocky "brown bar" who thinks he or she knows it all. Try to enlist the advice of experienced NCOs and learn as much as you can from these seasoned veterans. Do so in private, so that you maintain a sense of bearing and leadership among the troops. Discuss the important decisions and orders you plan to execute with your top NCOs, but realize the final decision will be yours.

Keep in mind that you must earn respect, and not demand it simply because you wear bars on your shoulders. They're obligated to respect the rank, but not you as a potential leader. Until you become a senior officer, you should listen and learn from your senior NCOs. Treat everyone under you command with respect and courtesy. You'll find that 99 percent of the time, they’ll return the favor.
The bottom line is that almost any major will get you into officer training. How you move up the officer ranks is entirely up to you.