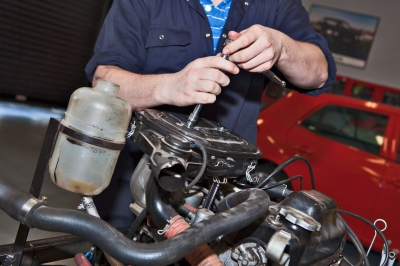 Automotive careers used to be the backbone of the Midwest and, to a great extent, the entire US industrial base. That position has declined in recent decades, to the point that many aspiring engineers aren't even thinking about looking for auto technician jobs. The assumption that's commonly made from people outside the auto industry is that all the high-skill, high-tech automotive careers are either taken already or at risk of outsourcing and layoffs. This isn't the case at all; auto technician jobs have opened—and stayed open—with the rise in demand for mechatronics specialists.

Mechatronics is a hybrid field. The term itself refers to the complicated interactions between a vehicle's various mechanical, hydraulic, electrical, and computer systems. As vehicle technology becomes ever more sophisticated, the need for smooth integration between these systems grows to be more keenly felt by large automakers.

The industry is having trouble filling all of the currently available auto technician jobs, however, as a consequence of the changes to the auto market over the last few decades. For one thing, the rapid computerization of cars has greatly expanded the demand for skilled engineers to fill the auto technician jobs. Government contracts for technology-intensive products such as space probes and planetary landers have also expanded. Demand has further increased as a result of new mileage standards and the desire for smarter fuel consumption to be built into engines. Automakers are also on the lookout for new automated manufacturing techniques that are heavy on robotics.

Unfortunately, just as the supply of auto technician jobs is expanding, the pool of qualified applicants is either stagnant or actively shrinking. Here, the automotive industry is a victim of its own policies. The perception among highly skilled applicants, according to Kristin Dziczek of the Center for Automotive Research (CAR), is that auto technician jobs aren't secure, can't be trusted to last through an entire career, and would entail successful applicants moving to the economically depressed areas of the Rust Belt such as Detroit.

These factors—high demand for skilled labor, low supply of exactly the kind of engineers who are most desirable, and the impression that auto technician jobs are strictly temporary—have worked to create an anomaly: a large, wide-open labor market that few people are applying to. While this is making things rough for the industry at large, one of the unfilled auto technician jobs could be just what you're looking for.