Keep These Five Phrases Out of the Interview 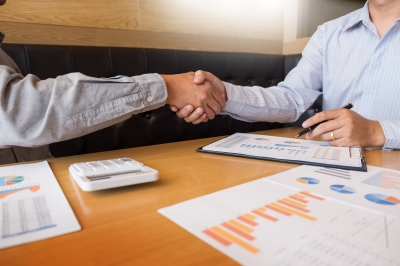 A job interview lets you showcase your personality, winning attitude and soft skills to a hiring manager. No matter how much you wow another person with your smile and easygoing attitude, certain phrases might sink your chances of landing a job. Discover five phrases to avoid during an interview if you want to come across as a professional go-getter who can take a potential employer to the next level.

This phrase, combined with words such as "like" and "um," is filler. Silence speaks volumes compared to filling in the parts where you're thinking of a response to a job interview question. Hiring managers value someone who thinks before responding to a question. Staying silent for a few breaths indicates you're a problem solver. If you want to truly know what an interviewer thinks of your response, say "Does that make sense?"

Adding the word "but" to a job interview answer instantly gives your sentence a negative connotation. Convey a completely positive attitude and don't negate things with a "but" in your answer. Everything you say before the "but" could end up being meaningless because your true feelings about a situation are what you say after this filler word.

You should always be honest during a job interview. Starting a sentence with "To be honest" demonstrates that at some point during the interview you may have been dishonest. Rather than say "to be honest," start your sentence with "I'm going to be blunt with you." The second phrase maintains your integrity and lets your interviewer know you can be diplomatic as well as somewhat harsh if necessary.

"Bro" projects a sense of informality into a job interview. Although some people may see this as a colloquialism, others may find it too informal and too familiar. You can become more familiar with your co-workers and supervisor after you're hired. An interview is a no-nonsense affair that bespeaks your skills and professional attitude.

5. My Time with Them Had Come to a Close

Rather than have a vague response as to why you left a previous employer, be completely honest about it. You can show honesty and integrity without being negative. Do not slam any previous employers. You can still say you were fired or had differences of opinion with your boss, because these circumstances are totally normal in a working relationship. Interviewers expect people might have had differences of opinion at some point.

How to Avoid These Five Phrases

Avoid these phrases by having mock interviews ahead of your real interview. Find someone you trust, such as a friend, loved one or mentor, and have that person act as a hiring manager. This person can ask you real questions you may run across in an actual interview. Consider video recording each session to gauge your performance. Rehearse your interview skills until you wipe these common verbiage faux pas out of your conversation.

A job interview should be a positive experience for everyone. These phrases take away from your skills and personality, and they make the hiring manager wonder why you're in the interview at all. How do you practice avoiding negative phrasing ahead of an interview?

Photo courtesy of IndypendenZ at FreeDigitalPhotos.net

Man on a mission: How Wes Hall and the BlackNorth Initiative are br...
news via Financial Post - Top...