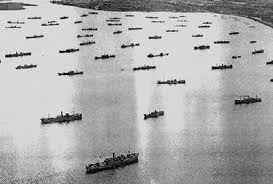 During World War II, logistics at sea was vital for all sides involved. The Germans with no overseas colonies and a weak surface fleet relied on what they called milk cows to service their submarines at sea. This involved a larger sub rendezvousing with a smaller attack sub and replenishing her.

The rendezvous took place in the Caribbean where the waters were calmer. The sub crews were only too happy to be resupplied. On a journey's beginning the food was surprisingly good, but as can be imagined, with no large space to store food and a lack of refrigeration, food quality quickly deteriorated.

The British ships did not have to do much resupply at sea as their war was mostly in the Atlantic where the British had a powerful navy and an empire with well maintained ports in which ships could dock. Their powerful navy also meant that ships were mostly free from ocean attack in port, though the air attack often presented a threat, especially in the Mediterranean where distances were smaller.

The Japanese had an extensive empire with ports with which to resupply in at war's outbreak. This was good for them because though they had a modern, powerful navy, they were surprisingly very unsophisticated in the merchant marine aspects of warfare. Japan did not have a long sea tradition other than fishing boats and being in the merchant marines was not warrior-like, and being a warrior was something the Japanese took pride in.

Consequently, they never convoyed ( sailing ships in a box formation protected by warships) their ships as the British and Americans did on the high seas. The United States, therefore, was so successful at destroying Japanese merchant ships that American planes and subs took to sinking the sailboats used for fishing by the Japanese as almost every other target was destroyed on the seas around Japan ( the Japanese were using them as merchant ships as U.S. Intelligence reported and which was confirmed subsequently).

The Soviet Union's Navy of World War II played no active part, except to act as a pool of replacement for soldiers when needed. The convoying which brought vital lend-lease to the Soviets was protected by the British and American Navy and the ships convoyed were Merchantmen of the United States and Britain. Russia's massive land victories were too important for any of the Allies to care about her naval contribution anyway.

The United States developed the most sophisticated method of resupply for her warships of any of the nations of the war. The Pacific was too vast for massive resupply by port if a navy was fighting a path up the Central Pacific, especially if a country wished too keep as many ships in action as possible.

The United States, therefore, resupplied at sea using 1000 ship fleet trains. It effectively doubled the size of the navy since ships did not have to alternate as one group fought and another resupplied far away in port. All ships fought and resupplied at sea simultaneously. The only thing that alternated were the commands and the fleet's number designation depending if Admiral Spruance or Admiral Halsey was in command.

It was this method of supply which led the United States to victory against Japan. For the British, who started the war with the world's largest fleet ( A majority of the ships of D-day were British ) an extensive system of ports overseas did just fine as the Mediterranean, the Indian Ocean and the Atlantic where they fought were not as vast as the Pacific.

Jeffrey Ruzicka is a retired executive of a small company that specializes in industrial water treatment. He lives happily with his wife in Western Pennsylvania and is a contributing writer toLogisticsJobSite,LogisticsJobSiteBlog and Nexxt.