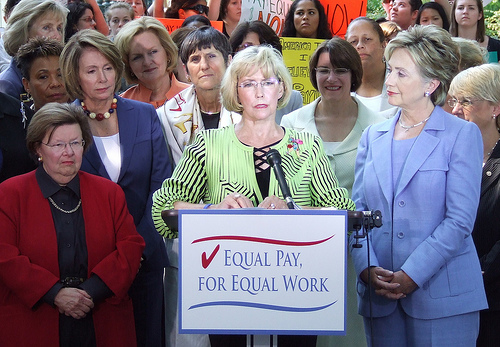 The gender pay gap refers to the difference in wages between men and women. President John F. Kennedy signed the Equal Pay Act in 1963 to prevent pay discrimination against women in the workplace. Despite this legislation, American women still make less than men, on average, over the course of a year's wages. The reasons for the gap are not necessarily discriminatory, but a lot of work must be done to help bring about pay equality for working women. Meet some of the people trying to lessen the pay gap for the female workforce.

Lilly Ledbetter worked her way up the corporate ladder to earn the CEO position at Goodyear. She began working at a Goodyear plant in Alabama in 1979 and says she was told not to discuss her salary, or she would be fired. In 1998, Ledbetter received an anonymous note in her mailbox comparing her salary to those of CEOs in similar positions. She realized that she earned 40 percent less than men.

Ledbetter sued Goodyear and won a judgment for $3.8 million. However, on appeal, the U.S. Supreme Court ruled in the company's favor with a 5-4 vote, citing the fact that the plaintiff didn't report the discrimination before the 180-day time limit. As a result, she did not receive a dime from the case. Rather than retire, Ledbetter became a public speaker who reaches out to young women at colleges and universities talking about pay equality. At age 77, Ledbetter endorsed Hillary Clinton to run for president.

Linda D. Hallman and the AAUW

Linda D. Hallman is the executive director of the American Association of University Women. The organization started making the case for gender pay equality in 1913, and members of this group stood by Kennedy when he signed the landmark Equal Pay Act. One goal of the AAUW is to lobby Congress to pass the Paycheck Fairness Act, a law designed to prevent retaliation against women who take their employers to task about pay issues. The law also closes loopholes in the Equal Pay Act.

In addition to acting as a chief lobbyist, Hallman oversees an organization that compiles statistics on the gender pay gap. The AAUW assesses pay equality, creates publications and urges everyone to start talking about pay disparity between men and women.

In early 2013, President Barack Obama chose to try to make pay better for women by taking executive action rather than wait for Congress to act. Bringing about change with regards to equal pay was one promise Obama made in his 2010 State of the Union address. The goal of this task force is to educate Americans about this issue, to coordinate efforts to combat gender pay discrimination among all federal agencies and to collect better data so the government has a more accurate assessment of gender pay disparity.

Dr. Claudia Goldin is the Henry Lee Professor of Economics at Harvard University. She also chairs the Development of the American Economy initiative of the National Bureau of Economics Research. Goldin's book "Understanding the Gender Gap: An Economic History of American Women" came out in 1990. Since then, hundreds of people cite her research papers that cover pay disparity, including one from 2009 called "Dynamics of the Gender Gap for Young Professionals in the Financial and Corporate Sectors." The distinguished professor's area of expertise is the role of women in the U.S. economy, and many of her papers deal with how women affect the current economic climate.

Dr. Marianne Bertrand is the Chris P. Dialynas Distinguished Service Professor of Economics at the University of Chicago Booth School of Business. Bertrand holds fellowships at three major labor and economics groups, including the National Bureau of Economic Research. Like Goldin, Bertrand frequently publishes papers regarding women's roles in the American labor force. Bertrand co-authored Goldin's major research on the gender gap for young professionals. In early 2016, Bertrand examined reasons why skilled women laborers have lower marriage rates than unskilled ones. Her major area of expertise is applied microeconomics relating to labor, development and corporate finance.

All five of these people are vocal supporters of improving the ways women earn a living in America. Through their own individual efforts and through the work of various groups, issues relating to the gender pay gap may not dissipate until the quality of life of women change for the better.