My Pool Room, I think? 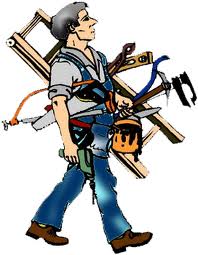 I am remodeling my basement, at least that’s what I call it.  It’s really just having a small carpet and a third of an interior wall put in; along with two doors to make the room private.   My daughter, her husband and our granddaughter are going to be moving in while she completes her last year of school.

The last owner of my house had started the job by putting in a whole wall and part of another, but never finished.  The reason is that there is kind of an underground river flowing under my house.  The old owner didn’t want to deal with the cost of fixing this problem right, so she abandoned the idea of finishing the basement.  To be fair, she was quite old and what was she going to do with the finished room anyway?

Then my wife and I bought the place and a few years back we put in interior drains and a sump pump, so the river problem disappeared.   This is a better way than French drains if you have a big water problem.  The reason is that French drains divert the water that comes to the house, especially from rain, but they aren’t really designed to deal with water that flows under your house.

At any rate, with a dry basement it became possible for me to plan a step by step approach to doing some basement remodeling.  A dry floor meant a dry carpet, walls that don’t rot after they are built and no water to attract carpenter ants which need a ready source of water.  Let me add too, it also meant electricity without electrocution, a worthy goal in any house upgrade.

I lacked motivation to put in my finished basement though.  As all homeowners know, half of motivational maladjustment is because a half crisis unfolds in your house anytime you want to remodel whether for looks or fun.  So, no surprise that after the basement was fixed, hail came and the roof needed redone.  And half the roof wasn’t covered by insurance as it was just a very old roof when I bought the house.

Then my friend and furnace repairman, Jimmy, told me that he wouldn’t be able to get parts for my 1952 furnace the next time it blew.  He was fashioning parts as it was to do repairs.  So, I decided to replace my 1952 furnace that had a 50% efficiency rating with a high efficiency furnace. Hey, might as well add air conditioning too I figured.  It hadn’t made sense before when the furnace was so inefficient.   Of course; I couldn’t let that new, efficient heat and cold air escape out of bad windows.

So we got new windows.  Triple pane glass is what we got.  And don’t let salespeople talk you into something else if you are ever intending to sell the house.  Pella Windows are a selling point, I don’t care what the knock about overhype.

Now, I’m not, let me add, a snob who puts my rich remodeling projects in my Christmas cards with a mention of how the cats and I love the Hamptons in fall.  (I have cats, but I also have three absolute mutts by the way).  My wife and I roasted for 5 years without air conditioning; except in one room.   We had five windows that were cracked head to toe and two others that leaked in the meantime.  That meant we froze for five years too even though we covered the window glass cracks with four mill plastic drop cloth plus insulation and duct tape around the window frames.

I know this isn’t quite a baked potato in the pocket during winter hardship story, still we have every right now to get my future pool room done; just as soon as my daughter, son-in-law and granddaughter leave.  They do leave, right?