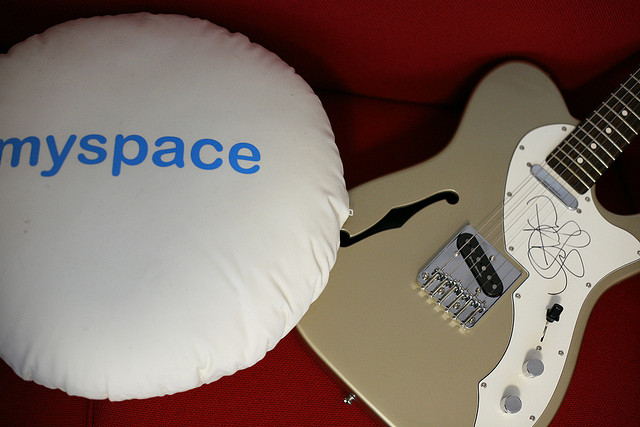 Talk about a Throwback Thursday. MySpace, the site that turned millions of us on to social media in the mid-2000s before suffering a precipitous decline into obscurity, is still alive in 2015 — and it's clawing its way back to relevancy. While a MySpace comeback may sound improbable, web traffic data confirms its legitimacy. Over 50 million U.S. visitors accessed the site in 2014, a 575 percent increase from the same month a year before.

This nascent MySpace comeback is believed to be driven by a few factors. First, the site has returned to its original purpose, which was to provide a place for musicians, bands, stand-up comics and other entertainers to share their work, connect with fans and network with one another. During the early 2000s, MySpace was a big name in the entertainment community before members of the general public harnessed its technology to craft online personae. In the mid-2010s, entertainers once again appear to be getting great exposure from the site: November 2014 saw MySpace receive over 350 million unique video views.

Another driving factor behind the MySpace comeback is Throwback Thursday itself. For those unfamiliar, this social media fad involves exhuming old digital photos – frequently from high school and college years – and posting them on popular social media platforms such as Facebook, Twitter and Instagram. Consequently, the MySpace comeback is particularly pronounced on Thursdays, with traffic spiking as users re-access their old profiles and scour them for pictures to post for TBT. While this aspect of MySpace's comeback is almost entirely dependent on the durability of the TBT fad itself, for now it is enabling the site to harness the extra ad dollars that come from increased traffic to position itself for a sustained comeback.

Lastly, data culled by parent company Viant Inc., reveals that much of the MySpace comeback is being driven by younger MySpace users in the 17- to 25-year-old age bracket. Several factors may explain why youngsters, many of them using social media for the first time, would flock to a site like MySpace rather than one of its more popular competitors. One is the multi-generational appeal of sites such as Facebook and Twitter. Many high school and college students like the idea of having an online presence, yet they don't want their lives laid bare for the prying eyes of parents, grandparents, and teachers or professors. Recent and soon-to-be graduates have an added incentive to use a less ubiquitous social network, as it is well known that hiring managers use social media to research candidates. Moreover, the page design capabilities of MySpace – unlike Facebook and Twitter, MySpace users can choose a background for their pages and even have them play music – remain a big draw for teens and young adults.

While the site may never be the craze it was in 2006, its executives are forming big plans around this MySpace comeback. They've teamed with several online media companies to use the site's traffic and registration data to study online ad effectiveness. Furthermore, MySpace is poised for success at what it set out to do over a decade ago: to provide a place for entertainers and fans to connect.