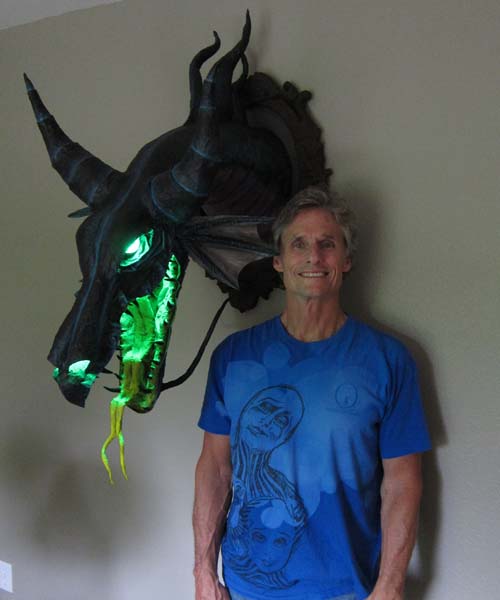 Last week I told you about a bunch of ideas for shredded paper, either for alternative purposes or supplies for projects. One of the project ideas was paper mache and I’m sure several of my readers rolled their eyes and thought to themselves, “Yeah, sure, but what is that good for really?”

Let me introduce you to Dan Reeder, a professional paper mace artist of epic proportions. By epic I mean his work is appreciated on a colossal dragon sized scale. For the past 38 years Reeder has been developing his own paper mache and fabric technique that allows him to create elaborately detailed mythological creatures of all shapes and sizes,

Starting with one little dragon when he was 22 years old, Reeder who is now 60 – though he only looks 59 in his picture, has literally written the books on sculpting with paper mache The Simple Screamer: A Guide to the Art of Paper and Cloth Mâché (1984, Gibbs-Smith Publishers, Layton, Utah )  and the sequel,  Make Something Ugly for a Change:  The Definitive Guide to Paper and Cloth Mâché (1999). Unfortunately both of those books went out of print in 2006. Reeder has however combined and updated the information into one volume now available called Papier Mâché Monsters:  Turning Trinkets and Trash into Magnificent Monstrosities (Gibbs-Smith Publishers).

Books aren’t his only profit point however. Reeder’s work gets noticed and attracts followers through his social media efforts. His blog and tutorial videos are shared across the web garnishing Reeder many compliments and fans. From there people commission large and small scale sculptures from the artist. His latest piece - a trophy mounted dragon head resembling the evil sorceress Maleficent from Disney’s Sleeping Beauty, complete with green glowing L.E.D. eyes and mouth – sold for $2000 plus shipping to France.

Because of the scale and immense detail Reeder puts into his projects he is limited to the number of commissions he can complete in a year so slots fill up on a first come first serve basis. Each commissioned piece is guaranteed one of a kind but they all lead to inspiration for other personal pieces Reeder thinks up.

When he’s not slopping away in the studio Reeder also attends educational art conferences as a keynote speaker. People travel from all over to hear how he tackles obstacles and develops inventive new ideas using his technique.

Reeder is an excellent example of someone who has succeeded in a medium where many people are afraid to explore. Better than that he shares his insight and encourages others to find the same joy and achievement he has experienced building his career. He’s like the Bob Ross of the paper/fabric mache world.

Take a cue from Reeder and don’t be afraid to get your hands dirty and turn a passion into a profession.