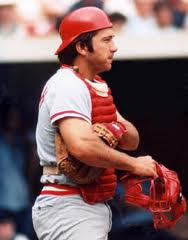 Lewis Timberlakes tells the story of a young man who walked across the auditorium floor to receive his high school diploma at Binger High School in Binger, Oklahoma. As the principal handed him his diploma, he asked the athletic looking graduate, “John, what do you want to do with the rest of your life?” The young man responded, “I want to become one of the greatest baseball catchers that ever lived.” At this point the high school graduating class burst into laughter at the young man. They thought he was making a foolish and wishful statement. But, they didn’t laugh a few years later when Johnny Bench walked onto the Cincinnati Reds baseball diamond, and began a phenomenal career in Major League Baseball.

As the years passed Johnny Bench proved to the world he really was one of the best catchers who would play the game of baseball. Bench was elected to the National Baseball Hall of Fame in Cooperstown, New York in 1989. He was elected in his first year eligible and appeared on 96% of the ballots, the third-highest percentage to that time. Three years earlier, Bench had been inducted into the Cincinnati Reds Hall of Fame in 1986 and his uniform #5 was retired by the team. He proved to them and himself he could be successful in the career he had chosen.

So, often people will laugh at the dreams of others. This kind of treatment can plant the seeds of doubt and failure, and prevent that person from making the most of their skills and talents. The same goes for you when you are making plans to succeed in your career. Without meaning to, people can laugh and ridicule your plans to be successful in your life’s calling. It is at this point you turn deaf ears to their demeaning comments.

It is vital to choose the people carefully, with whom you share your dreams and plans. By choosing the right people to confide in, you will increase your support from others.

Tom Borg is president of Tom Borg Consulting, LLC. He is a business consultant, speaker, coach and author. He helps companies and organization become more profitable by increasing their value and lowering their costs through the professional development of their managers and employees. Please see more of his blogs at ConstructionJobForceblog.com and view additional job postings at Nexxt.

People Laugh When Warren Buffett Says These 3 Words. But They're Pu...
news via Inc.com