Preventing Shoplifting in Your Store 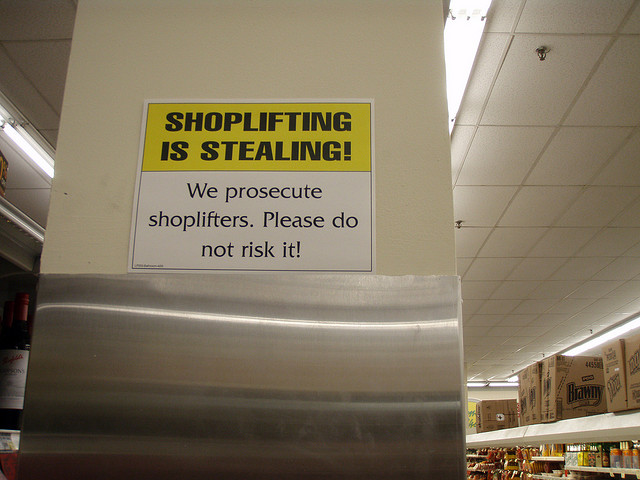 Losses due to theft amount to $13 billion each year in the retail industry, or roughly $35 million per day. Stores trying to compete with e-commerce websites need to have every advantage possible to improve their bottom line, including ways to prevent shoplifting. Managers and owners must know how thieves think in order to combat the problem.

Retailers can take several practical steps to prevent shoplifting any time the store is open. Shoplifting falls into two types. Organized theft involves groups of people who typically target larger retailers and resell items either online or in "used" merchandise stores. Impulse shoplifters do not go into a store with the intent to steal but do so when they see an item they want. As much as 75 percent of store theft comes from the impulse burglars, although shoplifting crime rings appear to be on the rise as of 2011.

Stores must realize what items get stolen the most to help prevent shoplifting. Smaller, easy-to-hide stuff worth a lot of money walks out the door first. Clothing can easily be folded up and concealed in a jacket. Small electronics may fit into pockets and purses. CDs and DVDs are easily concealable.

Anti-theft technology helps keep high-dollar items from leaving the store. Security tags, combined with security gates, set off alarms when merchandise goes out the door without being purchased. Video cameras capture the perpetrators for later prosecution. Hidden cameras placed all over the store catch people in the act. One such video advance includes tiny, hidden cameras in the eyes of mannequins placed next to high-dollar clothing racks. The eye-level view allows law enforcement to recognize faces.

Low-tech ways to keep items within the store are plentiful. Prevent shoplifting by hiring more staff. Have someone greet customers at the door and keep a subtle watch on customers as they peruse merchandise. Train staffers to watch for potential thieves, such as people wearing bulky coats on a hot day. Check backpacks, large bags and suspicious items while keeping them at a service desk until the shopper is ready to leave. Hire enough staff to tend to shoppers' needs quickly and prevent distractions. One method shoplifters use requires one person to distract a lone clerk while another stuffs stolen items into a bag or coat.

Design your store to prevent shoplifting. Keep wide-open spaces between racks so shoppers are easily seen. Put convex mirrors in corners so staffers may see people from a few aisles away. Put valuable items in locked cabinets, and put your register at the middle front of the store so customers walk out the door in front of your employees. Put signage in your store warning that shoplifters can be prosecuted. Post signs saying you have video cameras and other anti-theft technology.

Numerous methods help prevent shoplifting in your store. Some are simple, while others require a little more up-front investment. When you keep more items from walking out the door unpaid, your profits increase so you can focus on improving your store rather than mitigating losses.

Eddie Lampert wins court approval to buy Sears out of bankruptcy an...
news from Markets
Fla. police address viral video of toddler walking up to LEOs with ...
news via PoliceOne Daily News

Money out the Door
article posted by Staff Editor