Target and Other Retailers Dealing With Gun Control 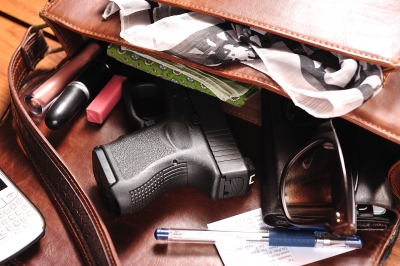 After a series of photos depicting men carrying large rifles through the aisles of Target were posted by gun-rights groups in Texas, the retail chain has modified its gun control policy, asking customers to leave their arms at home even in communities where the law permits them. With pressure from both gun rights groups and gun control groups, Target and other retail chains are taking steps to ensure all customers feel respected and comfortable.

In response to the controversial photos, the gun control group Moms Demand Action for Gun Sense in America began its month-long campaign to push Target to forbid the open carry of firearms on its premises. The National Rifle Association has scolded the groups posting the photos, affirming that it was not a neighborly act, according to The Wall Street Journal. Target's new policy respectfully asks customers not to bring guns into its stores. However, the retailer has expressed that at this time it does not intend to approach customers violating the policy because it is a request and not a prohibition. This attempt to appease both sides is a smart move for retailers dealing with the issue of gun control.

A memo on Target's website posted on July 2, 2014 from interim CEO John Mulligan states that the matter is complicated, but the open carry of firearms does not match up with the company's goal to create a family-friendly environment. The Open Carry Texas group posted on Facebook that it regrets Target's decision, but it intends to comply with the new policy. According to The Wall Street Journal, the purpose of the group's initiative to carry large firearms on the premises was to get people more comfortable with the sight of people carrying large firearms in public spaces.

Although gun rights activists may be offended by the new Target gun policy, the retail chain has made a smart move in taking action. According to retail consultant David Livingston, Target has likely appeased its primary public with the policy. Both Texas and Georgia have passed laws allowing licensed gun owners to carry their firearms onto most public properties, including restaurants, retail stores and even government buildings. However, private establishments in Texas are allowed to ban the open carry of guns if they sell alcohol, which Target does, and they can also ban concealed weapons even if the individual has a concealed-carry permit. Therefore, Target and other retail stores are well within their rights to ban guns on their premises.

Gun control can be a touchy subject for retailers as some customers are adamant about carrying their weapons at all times. However, if the retailer is a family-focused establishment looking to make customers feel more comfortable, implementing a policy such as the Target gun policy may be in the company's best interest. Ultimately, the decision concerning gun control should be based on the values of the retailer and its target public.

Photo courtesy of Amenic181 at FreeDigitalPhotos.net