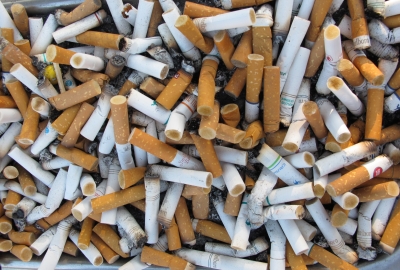 What is Third-Hand Smoke?

Unlike second-hand smoke, which you can easily avoid by leaving the area when someone is smoking, third-hand smoke is more difficult to escape. That's because it is present in the environment all around you. It's in the carpet, the ceiling, pillows on the couch and anywhere else someone has ever lit a cigarette. It sticks around long after the smoker has left, which is one reason why many companies designate smoking and non-smoking options for customers, such as non-smoking rental cars, hotel rooms or apartments.

Effects on the Body

Third-hand smoke is more than just a pesky smell; it can actually harm your health. Researchers at the Department of Energy's Lawrence Berkeley National Laboratory found that baby mice that had been exposed to smoke-treated fabric weighed less than mice who had lived in smoke-free cages. Additionally, the mice exposed to smoke experienced significant changes in white blood cell counts, leading to more inflammatory and allergic reactions. Furthermore, the effects on blood cell count persisted, even after 14 weeks of non-exposure to third-hand smoke, according to Jian-Hua Mao, one of the study's researchers.

Greater Risk to Babies and Children

The study authors note that third-hand smoke poses an even greater risk to human babies and small children. This is because they are closer to the floor and come into frequent contact with smoke-contaminated surfaces while crawling or sleeping. Cleaning the contaminated areas does not completely erase the effects of third-hand smoke, according to the study. In fact, there are still measurable levels of nicotine and carcinogens present in apartments, hotel rooms or other areas contaminated by cigarette smoke.

If the third-hand environment is permanent, there may be significant long-term health risks, according to a report by the Respiratory Health Association in Chicago. When the residual nicotine reacts to certain chemicals, it forms cancer-causing agents. When residual nicotine reacts with ozone in the air, ultra-fine particles form and begin to transport harmful chemicals, notes the RHA.

To reduce or eliminate the health risks associated with third-hand smoke, the RHA recommends urging the smoker to quit immediately, then replacing drapes, rugs, pillows and other textiles that have come in contact with smoke. In many cases, it may best to move away from the places where people have smoked in the past, even if it's your home.