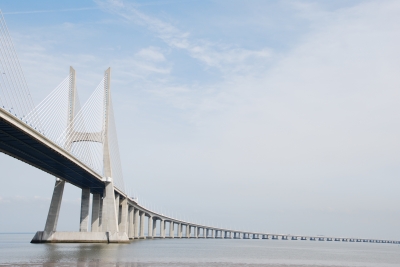 Engineering is an ever-changing field in which developments happen constantly. Mankind has come a long way since the invention of the wheel—in itself a praiseworthy feat. In the last two millennia alone, there have been innumerable engineering breakthroughs: so many, in fact, that there are libraries exclusively devoted to them. Read on to find out more about three particularly stunning—and relatively modern—engineering accomplishments.

The first engineering marvel on this list of famous structures is the Viaduc de Millau (Millau Viaduct) bridge in southern France. Cable-stayed bridges, which date back to 1595, are engineering wonders in themselves because they can be built almost anywhere. Because of the way they handle tension, suspension bridges usually only have two towers; on the other hand, cable-stayed bridges can be constructed with any number of anchor towers. Consequently, they can be made to span almost limitless distances.

The 1.5-mile-long Viaduc de Millau, which took three years to build, is the tallest cable-stayed bridge in the world. The viaduct cost roughly $477 million to construct and opened to traffic at the end of December 2004. In total, the bridge project used around 166,000 cubic yards of concrete, 5,500 tons of pre-stressed steel, and 21,000 tons of non-stressed steel. If you're not a fan of heights, don't look down: this bridge's tallest mast stretches 1,125 feet into the air, and its deck sits 890 feet above the ground below.

Second on the list of marvelously engineered structures is the Channel Tunnel. The tunnel, which is commonly known as the Chunnel, was a joint French-British project that began in 1988. Like many other grand engineering endeavors, it came in over budget: 80 percent over budget, in fact. In 1990, the British and French teams converged deep under the English Channel, creating a $6.8 billion link between England and France.

The Chunnel, which opened to the public in 1994, is equipped with specially engineered tracks for the Eurostar high-speed rail service. Eurostar trains can reach speeds of up to 186 mph and regularly carry passengers and cars from London's St Pancras International terminus to Gare du Nord railway station in Paris. The rail system, now known as High Speed 1, enables a 2.25-hour London-to-Paris commute.

Naturally, engineering marvels don't have to stay firmly planted on earth—at least, not any more. The third on this list of famous structures is really a collection of many other engineering marvels—and it orbits the planet at roughly 17,200 miles per hour. What is it? Why, the International Space Station, of course.

In 1998, the very first modules for the space station were sent up into orbit via rocket and space shuttle. The assembly process began with a Russian component named Zarya, which arrived on the back of the autonomous Baikonur rocket. The module provided the backbone of the station's original setup: electrical power, propulsion, communications, and altitude control functions.

Shortly after Zarya's arrival, NASA's Endeavor Shuttle arrived bearing another module: Unity, also known as Node 1. Unity "mated" successfully with Zarya at the beginning of December that year. In the years that followed, other parts of the space station arrived and were connected to the structure in situ.

In 2000, the first crew traveled to the space station via the Soyuz TM-31 and remained aboard for 136 days. Since then, the celestial structure has expanded significantly—both from a size and from an engineering perspective. Cranes, robotic arms, advanced life-support systems, and many other engineering wonders adorn the International Space Station and provide humanity with an ever-increasing amount of intergalactic knowledge.

These engineering achievements represent humanity's curious, inventive, and impactful presence on earth. The top of the Viaduc de Millau is frequently bathed in cloud; the Channel Tunnel connects an island and a continent; and under the right conditions, the International Space Station can be seen from earth with the naked eye. Engineering, it seems, is only limited by the imagination.