Virtual Reality in the Business World 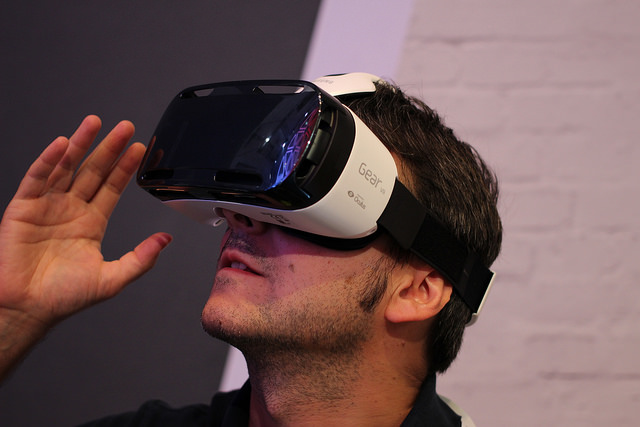 Several companies plan to take virtual reality technology from the gaming world and use special imaging systems as business applications sometime in 2016. Instead of first-person shooter video games, these types of visual representations can help real estate agents, car dealerships, architects and space companies develop and sell their products.

For example, a camera that uses virtual reality takes 360-degree pictures of the interior and exterior of a house. A real estate agent or homeowner then posts the virtual tour. Instead of watching a video through an Internet browser or a smartphone, the user dons a special headset to watch a tour as if he was actually walking through the house. When his head turns to the right, the user sees what the camera sees from floor to ceiling in front of his eyes.

Other business applications revolve around the design of buildings. A concept building rendered in three-dimensional virtual reality allows designers to walk through what a building looks like on the computer. The person using the headset manipulates objects, moves furniture, changes walls and alters the design of the place while walking through the new building. Instead of actual pictures of the building, everything appears as a computerized design. Car dealerships can use cameras to show people what it means to drive a certain car on the lot, while space companies design satellites with this technology.

Major companies are investing in virtual reality headsets that allow people to view these images. Oculus Rift, one of the industry leaders, allows people to connect headsets so they can see the same images at the same time. For example, an architect for a manufacturing plant can walk through a mock-up of a building in Germany, while the CEO can see what he sees in New York at the same time. Samsung plans to market its consumer-based gaming gear to businesses when it creates a lower-cost model. HTC offers hand-held hardware to help manipulate information, while Google Cardboard works with Android-based phones to create a viable experience for very little money.

Microsoft represents another big player in the virtual reality sweepstakes, thanks to its Windows Holographic system. Engineers create an item with hand gestures and body motions relative to the display field worn on the user's head. Wireless technology allows someone to save changes made to a Windows 10 computer nearby, and the user can see the results in real time. Automobile manufacturers can create cars in virtual spaces without sitting down at a physical computer by altering design parameters downloaded to the special design software.

These companies aim to take virtual reality to a new level now that the technology has come down in price. Immersive educational content, three-dimensional tours and virtual space vehicles are just three of the many possibilities businesses have with the future of these kinds of computer graphics.