What a Good Concierge Won’t Do… 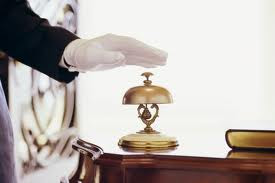 by Alex A. Kecskes
So you want to be a concierge? As you may have guessed, it’s not all directions, restaurant reservations and box theater tickets. A good concierge is resourceful, inventive and literally knows no limits when it comes to pleasing hotel guests. Here are just a few examples of what some concierges were asked to do in the name of service:
A concierge at the Four Seasons Resort in Whistler, British Columbia, booked a couple on a helicopter tour to a glacier and came back with an enormous ice cube that had to be shipped to their South Carolina home, intact.
One woman staying at the Dukes London Hotel asked her concierge for all-white foods--white bread on sandwiches, white sugar, everything had to be white. Another guest staying in Travaasa in Austin, Texas, insisted on eating only green colored food--leafy greens, green sauces, everything.
Then there was the concierge at the Charleston Place’s MGM Grand who obliged a couple with a lavish feast for their son’s seventh birthday that included Kushi oysters, curried mussels, fried rattlesnake and grilled kangaroo. At the Vail Cascade Resort, a concierge had to accommodate a sheik and his 30-plus entourage who literally took over the kitchen to cook an entire lamb.
At the XV Beacon in Boston, the concierge was asked to make 100 vanilla cupcakes for a gentleman’s marriage proposal. The cupcakes had to cover the king-size bed and spell out "Will You Marry Me?" with a big heart in the center.
If you want to pursue a career as a concierge, you might consider signing up for training at one of the many Concierge Schools.
For an added perspective, check out this video:
Got any tips on facing the challenges of a concierge? Share your comments in the section below.
Alex A. Kecskes has written hundreds of published articles on health/fitness, "green" issues, TV/film entertainment, restaurant reviews and many other topics. As a former Andy/Belding/One Show ad agency copywriter, he also writes web content, ads, brochures, sales letters, mailers and scripts for national B2B and B2C clients. Please see more of his blogs and view additional job postings on Nexxt.