What if Your Employee is Not a Team Player? 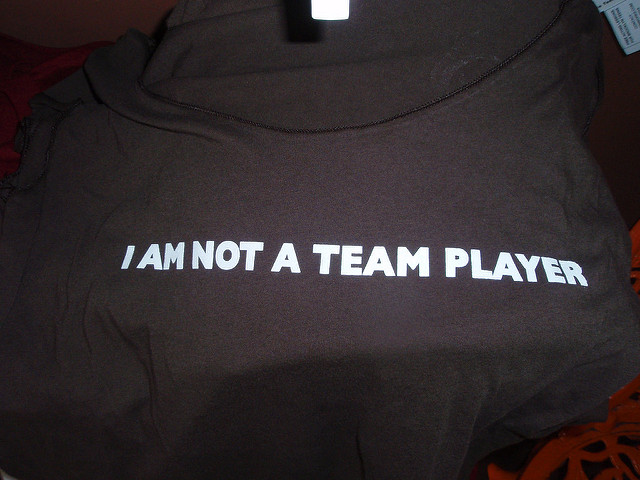 Not every person wants to be part of a team or knows how to be a team player. If you find that one of your employees has a tendency to shirk his team player duties or just doesn't seem invested in his team, there are a few strategies you can use to try to bring this person into the fold.

First, observe any patterns in the employee's behavior. Then, have a conversation with the employee to find out why he is not as team-oriented as other staff members. The employee might be focusing so much on his own career that he forgot about the importance of working well with others. He might be having problems at home that have taken his focus away from work and the company's mission. Maybe the employee is an introvert and has never really learned to work as part of a team. The employee might also be someone who developed bad habits overtime, such as coming to work late, procrastinating or having a bad attitude. These negative behaviors have a negative effect on the team and aren't good for morale.

The Characteristics of a Team Player

The employee may not realize he isn't being a team player. Explain the characteristics of what makes a great team player. Team players are reliable, and other team members can depend on them. They are also flexible, so they keep an open mind, and if something in the company changes, they adapt to the situation. Great team players are also committed to their teams, and they don't put their personal interests above those of the company. They help other members of the team and are also respectful to co-workers. Team players might not always agree with everyone else's opinion, but they offer constructive feedback and consider how their feedback will be received by others.

Why Teamwork Is Important

The employee may not realize why teamwork in the office is so important. When you're having a dialogue with him, explain the benefits of teamwork and how those benefits also trickle down to him individually. Being part of a team fosters learning and creativity. It brings together different employees' strengths in a complementary manner. Members of a team learn to build trust and how to resolve conflict. They also get the chance to feel ownership in their contributions and gain leadership skills. Explaining the tangible and intangible benefits of teamwork may motivate him to try harder to be a team player.

Encourage employees to be team players rather than jump to negative conclusions about them or write them off as a lost cause. Have a simple conversation with the employee, letting him know you're interested in his contributions. This can go a long way when it comes to turning an unmotivated or self-centered employee into a model team member.