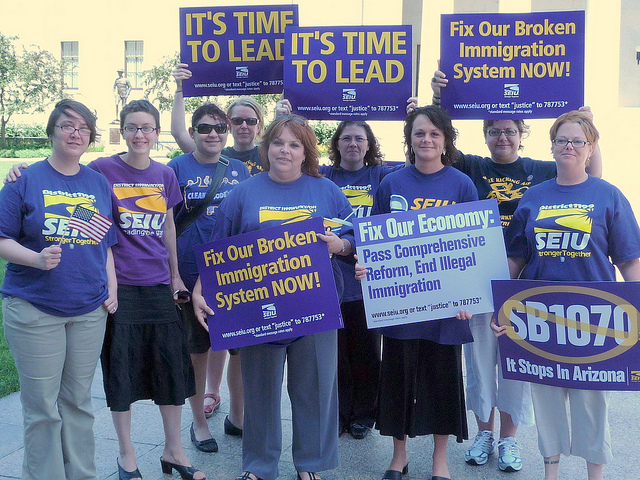 In an attempt to solve perceived immigration issues, the Trump administration promises to overhaul the H-1B visa program. This program, favored by big tech companies, allows 85,000 immigrants into the United States for the purpose of working in the technology departments of these firms. Workforce has an updated tracker that lets HR departments see the effect immigration has on employment.

How the System Works

As of March 2017, H-1B visa program works on a lottery basis. The system randomly allots visas to firms who apply for them. Larger firms, such as Microsoft, Amazon and Apple, receive a higher percentage of the visas. Supporters of reforming this system, including President Donald Trump, believe changing the way H1-B visas go to companies strengthen jobs for Americans. However, any alternatives to the program may create immigration issues for American firms looking to hire the absolute best talent, regardless of nationality.

Workforce shares information about any proposals, bills in Congress, protests or major news regarding the H-1B visa program on its blog. As of March 2017, the website lists a dozen entries.

On Jan. 4, 2017, Rep. Darrell Issa (R-California) introduced legislation to change the H-1B visa program. Issa's proposal received backing from Democrats and Republicans in the House. Under Issa's bill, employers would pay foreign nationals more than American workers but would make it more difficult for firms to bring in entry-level employees to try to get less expensive labor.

Three weeks later, on Jan. 27, 2017, Trump signs his controversial executive order banning people from seven countries from entering the United States. After a few court challenges, the Federal Court of Appeals prevents the order from taking effect until both sides of issue can gather evidence for and against tighter immigration rules.

A survey released on Feb. 8, 2017, and compiled by the Institute for Corporate Productivity states that out of 261 companies surveyed, around 24 percent, or nearly one-fourth, expect that their productivity may decrease in 2017 due to the Trump administration's tougher stance on immigration.

Senators from Georgia and Arkansas proposed legislation in Congress to limit green cards. They also proposed to eliminate the diversity visa lottery, which is a program that gives higher priorities to countries that don't have a lot of immigrants in the United States. The senators introduced this legislation on Feb. 7, 2017.

On Feb. 24, 2017, a delegation from the National Association of Software and Services Companies arrived in Washington DC to try to convince lawmakers to keep immigrant workers coming into the country. The industry group says it relies on IT workers from India for their innovation, collaboration and productivity.

Workforce intends to update its blog continually when new issues arise. So long as immigration reform and policies, including the H-1B visa program, remain at the forefront of the minds of federal lawmakers, HR experts can stay tuned for more news.

Photo courtesy of ProgressOhio at Flickr.com

The Women’s March Was Just The Beginning
news via Refinery29

The case for auctioning visas
news from The Week - Business