Are Robots Taking Over? 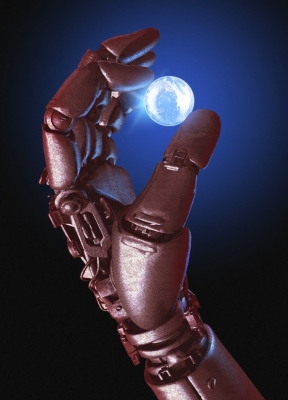 It reminds me of the old story of Paul Bunyan - man against machine. In this case, it appears the way of the future favors the accuracy and tirelessness of machines when it comes to some jobs.

The use of robotics in the workplace has been around for decades, and it continues to grow as technology advances. More and more manufacturing plants are being filled with mechanic worker arms, guided by video cameras, daily accomplishing tasks sometimes beyond the abilities of humans. Robots never go home, and never get tired or need a break.

All of this means more work accomplished with more precision, producing more products, and in the end hopefully more money for the company. It also might mean less jobs and less humans being employed. A recent New York Times article, entitled Skilled Work, Without the Worker, examines the growing trend and its effects on jobs and the economy.

"This is the future," writes author John Markoff. "A new wave of robots, far more adept than those now commonly used by automakers and other heavy manufacturers, are replacing workers around the world in both manufacturing and distribution."

Foxconn, the manufacturer of Apple’s iPhone, continues expanding by building more new plants and hiring thousands of new employees, and in the not-too-distant future, it plans on installing over a million robots to their workforce. What this exactly means for the thousands of employees is left unsaid at this time. But, according to Erik Brynjolfsson and Andrew McAfee, in their book Race Against the Machine, "The pace and scale of this encroachment into human skills is relatively recent and has profound economic implications."

A few things to remember in all of this is that even with more robotics, robots still require upkeep and repairs, so in time, the jobs may shift from production-level work to robotics-related careers. Even though robots can handle a huge amount of precision work, and can accomplish things that are risky for humans to do, there will still be a need for a real body to be around to solve problems and apply logical solutions when needed. Even robotics executives state that even though robotics assimilation will mean losing many blue-collar jobs. More efficient manufacturing processes “will create skilled jobs in designing, operating and servicing the assembly lines, as well as significant numbers of other kinds of jobs in the communities where factories are.”

So, for all of you looking to change careers, or for those of you looking at what kind of career and education to pursue, keep in mind the ever-growing trend of robotics.