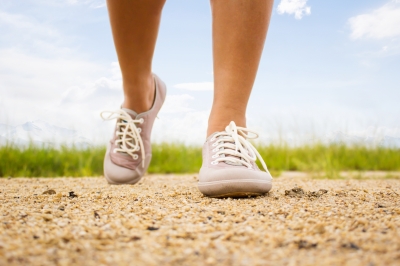 A small study shows that walking for as little as 15 minutes each day can reduce sugar cravings in overweight people. The study, performed at the University of Innsbruck in Austria by Larissa Ledochowski and her research team, analyzed data from a group of 47 overweight adults with an average age of 28.

After 15 minutes, both groups were instructed to sit for five minutes then complete a test designed to increase stress levels and physiological arousal. The test asked participants repeatedly about their sugar cravings and arousal. Once the test was complete, each participant was asked to open a piece of candy and hold it without consuming it. Those who had exercised beforehand reported fewer sugar cravings than those who had not.

"This study showed that brisk walking can be used as a strategy to reduce momentary food craving," said psychologist Adrian Meule of Ruhr University Bochum in Germany. The theory is that even mild exercise may provide people with enough cognitive stimulation to disrupt a specific food craving. Those who are dedicated enough to exercise or walk regularly may improve their ability to consistently make healthier food exercises.

The Austrian study does have a few limitations. The test group was small, and its results relied on the honesty and candor of the participants involved. Participants were exercising at a low intensity for a short period of time, a fact which doesn't provide reliable long-term information. However, numerous studies have proven exercise to be highly effective at managing stress and improving overall mood, and this could result in reduced sugar cravings for emotional eaters. Additionally, exercise activates metabolic processes that increase blood sugar availability to the brain, thereby also controlling sugar cravings.

The benefits of walking aren't limited to controlling food cravings. Moderate walking has been cited as the most popular form of regular exercise in the United States. It is convenient, natural and doesn't require much financial investment besides walking shoes.

A report on physical activity by the U.S. Surgeon General states that 50 percent of the American population needs to commit to a regular exercise regime. The American Heart Association agrees, stating that every adult in the United States should exercise for 30 minutes or more most days of the week. The benefits of walking extend far beyond reduced sugar cravings, making it a highly recommended form of exercise by most experts.