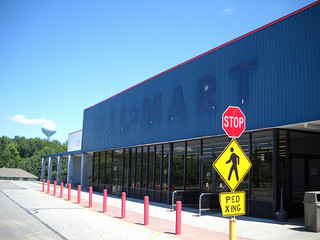 Wal-Mart recently announced that sales at its biggest retail stores have been falling. As a result, Wal-Mart is changing its retail strategy to include more small neighborhood stores. Sales figures at the company's first small stores are already experiencing strong growth.

These trends have prompted Wal-Mart to announce a shift in its retail strategy from huge mega-retail stores to neighborhood stores that are only around one-fifth of the size. In an interview with reporters, Wal-Mart CFO Charles Holley said that the company's consumers are increasingly looking for convenience.

Wal-Mart has more than 3,300 big Supercenter stores spread across the nation. Sales figures at these huge stores are suffering as increasing numbers of customers head online to make big-ticket purchases, such as furniture and televisions.

In contrast, sales at Wal-Mart's 400 Neighborhood Markets are growing. Unlike the Supercenters, these small stores are located in city centers, which makes them convenient for Americans who like to pick up items they need throughout the week rather than doing an all-in-one trip to a superstore over the weekend. According to consumer reports, increasing numbers of people are shopping in this way, regularly making trips to several different retail stores to get the items they need instead of stocking up at a single store.

Consumers across the United States can expect to see many more Neighborhood Markets opening in urban centers. These stores primarily focus on selling groceries and fresh produce. The company intends for them to compete with similar-sized stores, such as Whole Foods. The design of the new stores even resembles that of a Whole Foods Market.

Wal-Mart's new stores will highlight fresh produce, including organic fruits and vegetables, in response to consumer demands for healthier foods. Some stores will also feature locally grown produce in an attempt to attract community-minded and eco-conscious consumers.

Other big names in retail are also being forced to reinvent themselves to stay afloat in today's tough market. For example, Target, which has long been a fierce competitor of Wal-Mart, has chosen to rebrand itself as a fashion retailer by expanding the clothing line offered in its retail stores.

With consumer habits changing, even the nation's best-established retailers are being forced to alter their strategies to stay afloat. Wal-Mart's approach is to offer customers greater convenience through its small Neighborhood Market retail stores. Strong sales figures at the 400 Neighborhood Markets that already exist suggest that shifting the focus to these stores could be a smart move for Wal-Mart.

15 companies that are defying the retail meltdown by opening hundre...
news from Markets