Why Starbucks is Pushing Customers to Pay Through Their App 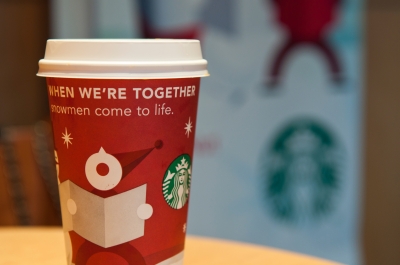 The Starbucks mobile app is a convenient way for customers of the world-renowned coffee shop to save a little time and earn some free rewards. Accrued benefits combined with the app’s simplicity result in an increased number of customer visits to the store, making the app a valuable and ultimately lucrative component of Starbucks’ digital marketing scheme.

Starbucks is among the forefront of companies who understand how substantively electronic commerce has altered the customer experience. With the Starbucks mobile app, customers can pay for their purchases quickly and easily with their smartphones. A new version of the app includes a feature that allows users to simply shake the phone to bring up a bar code that their barista scans to accept payment. The app is also linked to loyalty program that rewards users with free products, such as drinks or food, after accumulating a certain number of purchase points.

The app is supported by millions of users, and phone payments comprise a significant proportion of all Starbucks’ U.S.-based, in-store transactions. In addition, app payments at Starbucks have increased notably in less than one year's time. As the public become more comfortable with mobile payments, Starbucks sales are likely to increase as well.

The Starbucks mobile app, which is available on iTunes or the app store, has been updated several times to resolve issues. It was visually redesigned and has a new dashboard that displays a variety of items, including the user’s reward level, free items currently available using available rewards, recent transactions and the Starbucks Pick of the Week. Users can also share reward milestones via social networking platforms.

A new addition to the Starbucks mobile app allows users to tip their barista for up to two hours following a purchase. This small but innovative new feature is a key example of Starbucks' forward-reaching business strategy. Starbucks is also reportedly working on an app that would allow customers to place their orders ahead of time using their smartphones.

Embracing the mobile commerce sphere has worked out extremely well for Starbucks. Ultimately, the company’s overall innovative business model could have a great impact on consumer behavior. Consumers are increasingly comfortable using mobile technology, particularly when they collect free rewards. The Starbucks mobile app could also influence smaller businesses to embrace the creation of mobile apps and payment services. The potential boost to the bottom line is likely to offset the investment of developing one.

Starbucks is boosting its sales by encouraging its customers to use its app’s mobile payment technology. It is a simple way to improve the customer experience while also boosting the company’s sales. With the Starbucks mobile app, the already-thriving company has discovered a new path to increased revenue with minimal effort.

(Photo courtesy of artur84 at FreeDigitalPhotos.net)