Apple Designs Apps for its Watch 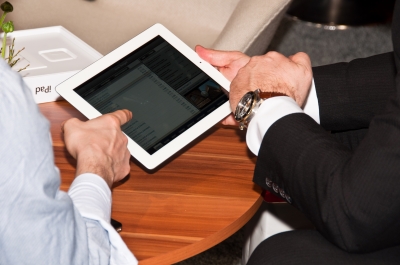 Some tech geeks believe the Apple Watch represents a new era in mobile technology. Instead of business apps on a tablet or smartphone, computer software on a small watch comes with wireless technology and advanced programming for everyday use.

Thousands of apps were made for the Apple Watch months before its April 24, 2015, release. Several business apps create tools designed to increase productivity and make on-the-go living more convenient. These programming nuggets come with the new iOS 8.2, an upgrade from the latest Apple software. Not all of the apps are free, and some software has service fees depending on its complexity.

The Apple Watch is the next big thing from the tech giant. Product releases occur slower after CEO Tim Cook took over the company after the late Steve Jobs' passing. The next iPhone may not happen until 2016 after the iPhone 6 release in early 2015, as Apple turns to wearable technology as part of its product lineup.

American Airlines' app announces pre-flight notifications. The app also tells wearers when to leave for the airport, if a flight gets delayed and where a connecting gate is located. The Apple Watch also lets travelers check in for flights, which saves time at the airport.

The Clear app sends reminders to the watch screen so business people can organize their lives more efficiently. When someone needs to be at a board meeting at 3 p.m., the watch alerts the wearer of the appointment. The app lets users create to-do lists, activities and times for important happenings. When the time for the event approaches, an alert sounds and the watch shows the wearer exactly what event is upcoming.

Invoice2Go uses cloud-based computing to help business owners stay informed regarding statistics, pricing, inventory, sales and time on the job. The wearable gear works with an online service to track time at job locations to maximize efficiency. Contractors can use the app for price estimates and purchase orders. If someone owes money for a job, service or product, the watch informs the owner what invoices have yet to be paid. Invoice2Go starts at $49 per year.

OfficeTime starts and stops a timer with a simple touch. The idea revolves around maximizing the time a business person spends in meetings, conference calls and at a desk. Professionals who charge hourly rates, such as consultants, lawyers and contractors, may find this app the most useful.

Salesforce for Apple Watch gives managers and marketers access to charts, sales reports and third-party information for real-time data streaming. This cloud-based app also lets developers create their own programs to improve productivity and sales numbers. The voice portion of the watch allows salespeople to look at their most recent dashboard view they accessed from a computer or smartphone.

The success of the Apple Watch hinges on its connectivity and accessibility to programs downloaded onto other devices. If business professionals find this wearable technology makes their lives easier, Apple may discover brisk sales throughout 2015. Wireless technology and voice commands may have taken the next step in the development of smaller, faster devices.