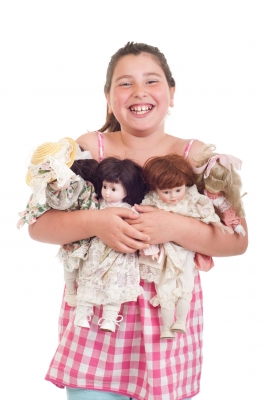 Mattel's newest version of Hello Barbie just got smarter. The toymaker announced in February 2015 that the doll can talk to a child and have potentially intelligent conversations. The technology works by recording someone's voice, transmitting the conversation to a cloud-based computer service and responding appropriately.

The computer program, called ToyTalk, analyzes what a child says and generates a response. The more someone talks to the new Hello Barbie, the more the doll learns with regard to speech recognition and artificial intelligence algorithms. If the technology works, a fully interactive doll for girls could be on store shelves by Christmas.

One huge caveat comes with the Hello Barbie design. The terms of service and privacy policy of ToyTalk state that any conversations recorded on the toy are shared with third-party vendors, and any speech recorded by the device may also be used for research purposes. Children often share private thoughts and fears with their dolls, and sometimes these conversations happen away from adults. Do parents want their children's privacy to be potentially invaded by this technology?

U.S. law may not provide any protection for consumers because the terms of service spell out precisely what occurs when someone opens the toy, presses the microphone button and begins to speak. Even if parents read the terms of service on Hello Barbie and understand what the legal language says, it doesn't necessarily follow that adults understand the ramifications of what they agree to when they push play.

What happens when and if the new Hello Barbie records a conversation that could be incriminating? Can a court system subpoena ToyTalk to hand over the voice recording? How long does the company maintain the recordings of a child's voice? Should ToyTalk employees be held liable if they hear of potential child abuse and do not notify the authorities? The questions surrounding children's privacy come about thanks to the murky field of informed consent.

State laws regarding evidence recorded electronically differ from jurisdiction to jurisdiction. If the doll is in one state, but the physical recording is in another, which state laws apply if criminal activity gets recorded? Can the U.S. Federal Trade Commission insist on stricter labeling of such toys in the future?

Perhaps parents would be happier with the newest version of GoldieBlox, the math-based engineering genius, for winter holiday shopping instead of Barbie. Mattel no longer dominates the market like it used to, and GoldieBlox represents a doll that encourages a child's critical thinking skills. Parents can buy a talking doll, but perhaps one that is not as artificially intelligent as the new Mattel design.

Mattel is taking a huge gamble with its new Hello Barbie doll. Talking dolls are great because they provide children with hours of entertainment having seemingly nonsensical conversations with their toys. However, giving someone else access to a child's innermost thoughts and feelings may be a bit much for some parents.