Electric Car That Drives Sideways and Can Shrink 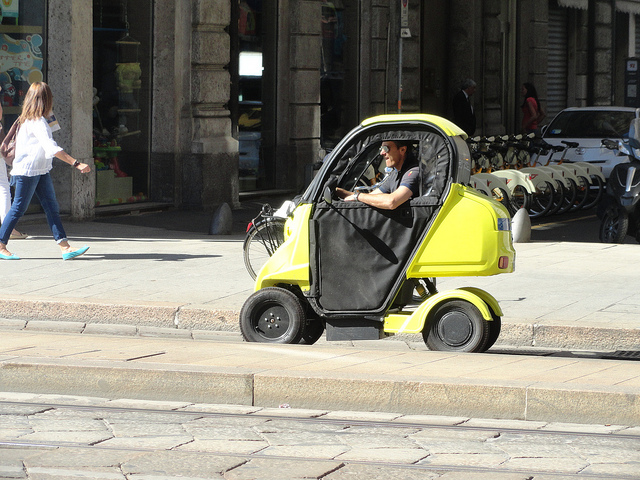 Several automobile manufacturers count having an electric car in their lineups. A few engineering teams, most notably from Google, have a driverless car that represents the future of car travel in the United States. One German team built the best of both concepts.

The EO Smart Connecting Car 2, or EOscc2 for short, was created by the German Research Center for Artificial Intelligence. The car aims to capture the market for commuters in large cities who need transportation to get in and out of small spaces. The power-packed vehicle includes a 54-volt lithium-ion battery. The electric car runs on four small 4-kW motors.

The beauty of this basic form of transportation lies in the details. The electric car comes with stereoscopic cameras with front and rear views. Potentiometer sensors, LiDAR and 3-D time-of-flight camera all connect to an onboard computer. These features let the car park itself and assist the driver with other functions.

Wheels can turn completely sideways in order to park in tight spaces. While the car parks itself, the cabin hunches up to fit into nearly impossible parking positions. This capability makes the EOscc2 nearly 3 feet shorter. The car has a very tight turn radius and can even move diagonally.

A docking interface on the electric car extends the range for some driving conditions. The docking port also adds on passenger or cargo modules for longer trips. Several of these cars can chain together to reduce wind resistance and share battery power.

Other engineering firms have built similar compact cars that contain some of these features. However, none compare to this tiny bit of high-tech wizardry. The ultimate goal of the EOscc2 is to become a completely driverless vehicle. Developers are also working on a technology that allows the vehicles to link together to form a train-like vehicle that travels long distances. Advances in battery power, recharging stations and infrastructure improvements make this electric car an interesting concept moving forward.

German engineers from Audi and other luxury automakers are testing autonomous vehicles on German roads, although these vehicles may not be commercially available for 20 to 30 years. Audi also has licenses to test the driverless technology in California. Unlike Google's compact, driverless system, Audi uses a full-sized vehicle fitted with a lot of sensors to perform the normal functions of a driver. The Audi concept differs greatly from the small team that created the EOscc2, since one markets towards very rich clients and the other targets everyday drivers.

A timetable for commercially available EOscc2 cars has not been set. The nifty transforming car appears on the YouTube channel ElectricCarsReport. The two-minute, 40-second video gives a basic demonstration of its capabilities. The car has no rear-view mirrors, contains two small headlights and turns doughnuts in the parking lot better than any car on the road.

The electric car market keeps expanding, and this new German entry has the potential to revolutionize the way people commute. The key remains making these high-end cars marketable and profitable. Like cellphones from the early 1990s, the EOscc2 may become a status symbol of the wealthy first.

Photo courtesy of Dzhingarova at Flickr.com